01201003 Hugh Hewitt: Hour 3 – Hugh talks about Supreme Court news with the Smart Guys, gets an update on the Prop. 8 trial in San Francisco from Austin Nimocks of the Alliance Defense Fund, and talks about inner city relief with Keith Phillips of World Impact.

END_OF_DOCUMENT_TOKEN_TO_BE_REPLACED

01201002 Hugh Hewitt: Hour 2 – Hugh talks about the reaction to Massachusetts yesterday with Weekly Standard editor Bill Kristol, then with Senate Republican Whip Jon Kyl. Later in the hour, Hugh talks with New Hampshire Senatorial candidate Kelly Ayotte, then replays his interview with Dan Weber of AMAC, the alternative to AARP.

END_OF_DOCUMENT_TOKEN_TO_BE_REPLACED

01201001 Hugh Hewitt: Hour 1 – Hugh talks Haiti and the impact of the Massachusetts election last night with Vanity Fair columnist Christopher Hitchens, and then bores in on what the Brown victory means with House Republican Whip Aaron Shock, and NRCC chairman Pete Sessions.

END_OF_DOCUMENT_TOKEN_TO_BE_REPLACED

Don’t worry, good liberals; according to the HuffPo, the Obama coalition is still holding together: 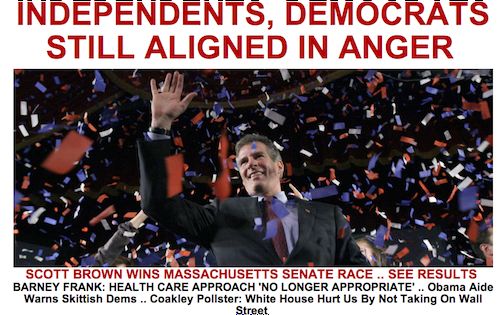 The day after Coakley’s bright lights suffered a Brown-out, there’s mutterings about the death of “health-care reform.” The administration has only itself to blame.

The Obama administration could have had health-care-payment reform passed a long time ago if they’d stuck to something you could fit on an index card – say, a one-percent tax on existing plans to fund insurance for the uninsured, with a 2-year cut-off (later extended to “infinity,” as government programs are wont to do); interstate competition; mandatory balloons for the kids when they get a shot. Something like that. Call it the “Health Insurance for People Who Don’t Have Any Right Now” bill, push the greased squealing pig through the marble trough of Congress, and voila: lots of time and political capital left over to squander on nationalizing banks and banning lead content in lead mines. (Studies show they’re FULL OF IT.) But no, we had to have the usual best-and-the-brightest approach, stuffed to bursting with laws and regulations that reached their tentacles down into every aspect of American life:

Any participant in AmeriHealth Section B (defined as someone who contributes to the plan, uses the plan, walks past the building where the plan is administered, or hears its name mentioned in the media [defined to include, but not limited to, broadcast, print, web-based information dispersal systems, mailings, smoke signals, skywriting] shall be required under penalty of imprisonment to refrain from exceeding 37% of the targeted resource allotment within a six-month period beginning, but not including, the date of their birth. Usage above this amount shall constitute anti-social activity, or “parasitical resource consumption,” punishable by death or (we’ll work this part out in committee)

All health plans shall be required to pay for mental health treatment and abortions, with the exception of mental-health issues incurred following an abortion

And so on. The irony is this: it’s not Obama’s bill. This unholy agglomeration burst from the skull of the Democratic Congressional geniuses, and the smartest man in the world has more or less said “It’s all good” and left it at that. But it’s Obamacare, and he’s taking the fall for it. The good folk of Massachusetts would have stuck another humorless wonk-drone in the Kennedy slot and let her bleat “aye,” but this – well, this was too much. This was just too much.

She was a lousy candidate, as well – bland, remote, aloof, a member of the ruling clique that scuttles from marbled hall to paneled room, arranging things for the hoi polloi, expecting only periodic burnt offerings in the form of an election as their grunting thanks. A candidate with a better touch might have beat Brown, but he or she would have had to sidle center-wise, emphasize independence and individuality. Big change, that. A year ago a fella could have proudly stood at the podium, ripped open his shirt to reveal an Obama O tattooed indelibly on his chest, and be assured of loud huzzahs, YouTube tributes, and a mention in European editorials approving the transformation in American politics. Now Obamunism, as some wags tagged it, has become a liability for many: the President seems less than Olympian, his speeches have become rivers of lugubrious syrup flecked with tin cliches, and a clammy dread has settled over many supporters. What if he’s not the smartest post-racial centrist uniter EVER? What if he’s a glib fellow with a Gibralter ego, a set of hoary trite leftist views unexamined since they were inhaled in a college-era dorm-room bull session, and a congenital inability to accommodate shifting political winds? Gosh, what if?

I mean, if you can’t trust a Chicago politician, what’s left?